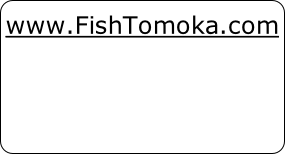 The Sheepshead is a basic silvery color; with 5 or 6 distinct vertical black bands on sides, not always the same on both sides with prominent teeth, including incisors, molars, and rounded grinders. There are no barbels on lower jaw and have strong and sharp spines on the dorsal and anal fins. The Sheepshead is similar to the black drum, Pogonias cromis; Atlantic spadefish, Chaetodipterus (black drum have barbels on lower jaw, Sheepshead do not; vertical barring on sides of black drum and spadefish disappear as fish mature; spadefish have small, brush-like teeth). They can be found inshore around oyster bars, seawalls and in tidal creeks. In late winter and early spring they move inshore for spawning, gathering over debris, artificial reefs and around navigation markers. When found inshore, they average 1-2 pounds and offshore are common to 8 pounds. The Florida record is 12 pounds 2 oz.  Sheepshead feed on mollusks and crustaceans such as fiddler crabs and barnacles; famed nibblers, prompting the saying that "anglers must strike just before they bite."

The Flounder’s body color is brown, its shade depending on color of bottom, with numerous spots and blotches. There are 3 prominent eye-like spots forming a triangle; one spot on lateral line, one above, one below; numerous white spots scattered over body and fins (albigutta, white-spotted). The Flounder has strong canine-like teeth and there is a caudal fin in shape of wedge, its tip in the middle. Similar fish are the southern flounder, P. lethostigma (no eye-like spots; color pattern is key to distinguishing the two species). Flounder can be found inshore on sandy or mud bottoms, often ranging into tidal creeks; occasionally caught on nearshore rocky reefs. The common size is up to 2 pounds, generally smaller than southern flounder. Flounder hatches into usual fish form, but right eye migrates over to left side early in life; a bottom dweller; thought to spawn offshore and feeds on crustaceans and small fishes.

The Red Drum fish has a chin without barbels; copper bronze body, lighter shade in clear waters; one to many spots at base of tail (rarely no spots); mouth horizontal and opening downward; scales large. Similar fish are the black drum, Pogonias cromis. The Red Drum can be found inshore when they are juveniles, migrating out of the estuaries at about 30 inches (4 years) and joining the spawning population offshore. The average size is 27 inches and weighs about 8 pounds. The Florida record is 51 lbs., 8 ozs. Spawning occurs from August to November in nearshore waters; sudden cold snaps may kill red drum in shallow, inshore waters; feeds on crustaceans, fish and mollusks; longevity to 20 years or more.

The Common Snook have a distinct lateral line; high, divided dorsal fin; sloping forehead; large mouth, protruding lower jaw; grows much larger than other snooks; pelvic fin yellow. The Common Snook is similar to other Centropomus and can be found from central Florida south, usually inshore in coastal and brackish waters, along mangrove shorelines, seawalls, and bridges; also on reefs and pilings nearshore. Most catches are 5 to 8 pounds and the Florida record is 44 lbs., 3 ozs. The Common Snook spawns primarily in summer; cannot tolerate water temperatures below 60 degrees F; can tolerate wholly fresh or saltwater; schools along shore and in passes during spawning season; feeds on fish and large crustaceans.

The Tarpon's last ray of dorsal fin extended into long filament; one dorsal fin; back dark blue to green or greenish black, shading into bright silver on the sides; may be brownish gold in estuarien waters; huge scales; mouth large and points upward. Similar fish (as juveniles) are the ladyfish, Elops saurus. Tarpon's can be found primarily inshore, although adult fish spawn offshore where the ribbon-like larval stage of the fish can be found. Average size most angler catchs 40 to 50 pounds. The Florida record is 243 lbs. The Tarpon are slow growers; matures at 7 to 13 years of age; spawning occurs between May and September; female may lay more than 12 million eggs; can tolerate wide range of salinity; juveniles commonly found in fresh water; can breathe air at surface; feeds mainly on fish and large crustaceans.

The Spotted Sea Trout are dark gray or green above, with sky blue tinges shading to silvery and white below; numerous distinct round black spots on back, extending to the dorsal fins and tail; black margin on posterior of tail; no barbels; no scales on the soft dorsal fin; one or two prominent canine teeth usually present at tip of upper jaw. They are similar to other sea trout's. Spotted Sea Trout can be found inshore and/or nearshore over grass, sand and sandy bottoms; move into slow-moving or still, deep waters in cold weather. Common size is 4 pounds on west coast, larger on east coast. The Florida record is 15 lbs., 6 ozs. Spotted Sea Trout matures during first or second year and spawns inshore from March through November; often in association with seagrass beds; lives mainly in estuaries and moves only short distances; adults feed mainly on shrimp and small fish; prefers water temperatures between 58 and 81 degrees F and may be killed if trapped in shallow water during cold weather; longevity 8 to 10 years.

Lady Fish have a terminal mouth, slender body, small scales; last dorsal ray not elongated; head small and pointed. They are similar to juvenile tarpon, Megalops atlanticus. They can be found inshore, in bays and estuaries; occasionally enters freshwater, occurring in tidal pools and canals; often forms large schools and harasses bait at the surface. Average size is 2 to 3 pounds. The Florida record is 4 lbs., 10 ozs. Lady Fish are known to spawn offshore, ribbon-like larvae very similar to Albula and Megalops, peaking in fall; adult feeds predominantly on fish and crustaceans; leaps when hooked.

There are over *90 species of fish that can be found in the Tomoka River  (figure from the Florida Marine Research Institute). Scroll down to read more about just a few of the fish that you will have the opportunity to fish for. (Note: the information provided has been sourced from the Internet. Sources are the Florida Marine Research Institute, Wikipedia, and the Department of Environmental Protection). The information is current to that which was found.

The Black Drum has a high arched back and large scales; 10 to 14 pairs of chin barbels; gray or black colored body in adults; young have 4 to 6 vertical bars; has cobblestone-like teeth capable of crushing oysters. The vertical bars on juvenile black drum are somewhat similar to those on Sheepshead, Archosargus probatocephalus; spadefish, Chaetodipterus faber; red drum, Sciaenops ocellatus. Black Drums are found inshore common to bays and lagoons. The Black Drum is a bottom dweller often found around oyster beds.  Common size is up to 30 pounds.  *Florida Record: 93 lbs.  The Black Drums are the largest member of the Drum family and spawn near shore in winter to early spring. They feed on oysters, mussels, crabs, shrimp and occasionally fish. They can live for 35 or more years.

The Crevalle is similar to the Caranx and can be found both inshore and the open sea. The average size is 3-5 pounds and the Florida record is 51 lbs. The Crevalle tolerates a wide range of salinities; schools corner a school of baitfish at the surface and feed with commotion that can be seen at great distances; they feed mainly on small fish; peak spawning occurs offshore from March through September.